The Open RAN concept and movement is not new – mobile operators and network and technology vendors have been developing solutions, conducting trials and deploying networks for the last few years.  The important point is that Open RAN networks are being deployed today by major operators around the world – this is no longer a science experiment.  The Open RAN concept is about disaggregating the RAN functionality by building networks using a fully programmable software-defined mobile network solution based on open interfaces – radios, base stations, etc. – that runs on commercial, off-the-shelf hardware (COTS) with open interfaces.

Open RAN software and hardware vendors have been developing network solutions for the last few years.  As part of the research for this paper, iGR identified 22 publicly announced MNOs around the world using equipment from multiple vendors, including Altiostar, Mavenir and Parallel Wireless, who had deployed Open RAN in commercial networks. These MNOs have collectively just over 1.199 billion subscribers in their commercial networks and operate in countries or regions with a total population of more than 2.4 billion.

The takeaway here is that Open RAN is real; Open RAN can be, and is being, deployed in commercial networks today; the Open RAN community is coalescing and coordinating to move deployments along; the cost savings are being realized; and operational performance requirements and KPIs are being met.

The following key questions are addressed in the new white paper: 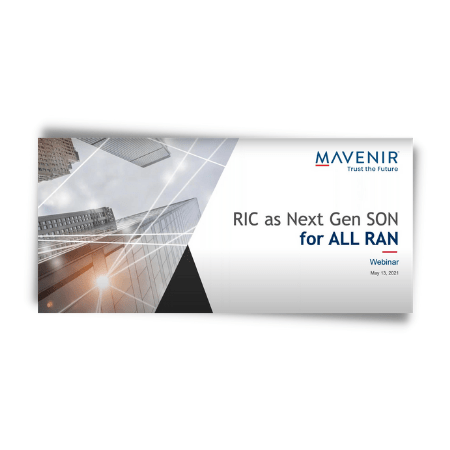 RIC as the Next Generation SON for All RAN

RIC as the Next Generation SON for Open RAN and More

What’s the Best Way to Get to Open RAN?

Mavenir supports and congratulates Vodafone with Open RAN rolling out and going live in the UK.

RIC as the Next Generation SON for All RAN

Download the webinar to hear from Chief Analyst Stéphane Téral from LightCounting and SVP/GM Kuntal Chowdhury who leads Mavenir’s AI and Analytics business as they discuss why the need for RIC as a next-generation SON has never been greater for 5G and webscale innovation.

RIC as the Next Generation SON for Open RAN and More

From the base station controller (BSC) to 3GPP self-organizing networks (SON), the radio access network intelligent controller (RIC) becomes the next-gen SON for all Gs.

What’s the Best Way to Get to Open RAN?