REDUCE TCO AT THE EDGE WITH VIRTUALIZED RAN

THE SHIFT FROM TRADITIONAL TO VIRTUALIZED MODELS

Virtualization fosters new architectures in the Radio Access Network (RAN) that enable mobile operators to dramatically improve performance and reduce costs. The transformation in the RAN will see architectures shift from traditional distributed/centralized models toward fully virtualized implementations, allowing operators to locate processing power cost-effectively where it is needed most.

There are three distinct types of RAN architecture: Distributed RAN (DRAN), Centralized RAN (CRAN) and Virtualized RAN (vRAN). Most mobile networks today are built with a DRAN architecture, whereby the baseband unit (BBU) and remote radio unit (RRU) are located at the cell site, typically in a cell site cabinet near or at the base of the tower. The RRU is located either with the BBU in the cabinet or on the tower near the antennas and then connected to the BBU via fiber using the Common Public Radio Interface (CPRI) protocol to transport the digitized RF data. The cell sites are then connected to the Evolved Packet Core (EPC) via backhaul transport links.

In a legacy CRAN architecture, BBUs are deployed in a central location – often referred to as a baseband hotel – while the RRUs remain at the cell sites. The distance between the central BBU site and RRUs can be between 5 to 15 kilometers and they are connected via CPRI-based fronthaul transport over fiber. The BBUs may control multiple cell sites and the baseband processing resources can be pooled. While collocating and sharing baseband resources improves network efficiency and reduces site costs, the benefits are often outweighed by the necessity for highly reliable, low-latency fronthaul transport that can only be delivered via expensive leased or owned fiber connections.

Virtualized RAN overcomes the limitations of CRAN by leveraging virtualization. The Virtualized RAN architecture comprises virtualized BBUs (vBBUs) running on general-purpose hardware in mobile data centers, or at cell sites, or other network-edge data centers and RRUs located at the cell sites. Virtualization enables new functional splits in the RAN elements, which relaxes the requirements for fronthaul transport and increases the distance that the vBBUs can be located from the cell site to up to 200 kilometers. The functional split allows operators to use Ethernet-based fronthaul and removes the dependence on proprietary and costly CPRI-based fiber for fronthaul. The vBBUs can be implemented alongside virtualized EPC (vEPC) elements in a mobile data center, which triggers further cost savings by eliminating the need for backhaul transport and improving latency. 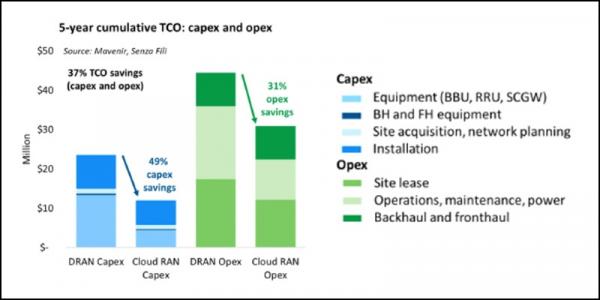 The TCO model shows a reduction of 37% deployment and operational costs over five years, due to a 49% savings in capex in the first year and an annual 31% savings in opex over the full period. The capex savings are mainly due to the virtualization of the BBUs and vBBU pooling, which allow for the use of lower-cost COTS hardware and less of it. Since pooling vBBUs utilizes compute resources more efficiently, less hardware is needed.

Opex savings are derived from reduced maintenance routines, power, and operations savings resulting from centralized vBBU locations that are cheaper and easier to access and operate. With less equipment needed to be located at cell sites, lease costs are reduced while operators also benefit from faster and more flexible deployments. Another key cost factor in the Virtualized RAN deployment is fronthaul. If the model assumed CPRI-based fronthaul, the opex savings would only have been 11% over five years, rather than 31%.

In a Virtualized RAN deployment, vBBU multiplexing dynamically allocates baseband resources to RRUs – reducing BBU capacity requirements by greater than 50%. Operationally, this allows operators to dynamically scale capacity where it is needed in the network during peak busy times or scale down during quiet times. The capability allows operators to move capacity to where users are as they move around the network, thereby improving the network performance and reducing costs.